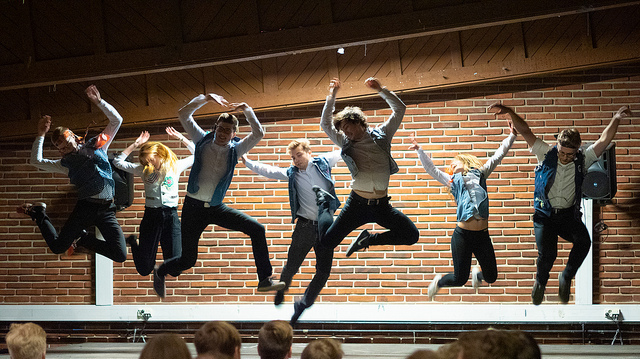 ManMan is most probably Finland’s finest Physicists’ show dance group! We love delighting our audiences at different events, from weddings to sitsit with our imaginative choreography and energetic performances. If you want a change from for example student events, then ManMan is the perfect option for you. Contact the ManManMan for example via Telegram (@amak001) for more information.

If you are a physicist and you want to join in, feel free to get in touch! The threshold for entering is kept as low as possible and dancers of every level are welcome. The most important thing is to have fun! We aim to keep the choreographies simple enough for everyone to be able to join in, but also that everyone finds enough of a challenge in it. Only a few of us have any previous dance experience. ManMan needs you!

Many good things start with a joke. ManMan didn’t. Jaana Vapaavuori’s vision of the physicists’ men’s dance group was at first meant as a joke, but it was soon to come true. In Autumn 2006, the freshmen became subject to a practical joke: the Freshmen ABC included an article about the Guild of Physics’ most traditional ManMan dance group, peppered with sexy promo pictures, which was to fall under the responsibility of that year’s freshmen.

In order to perfect the practical joke, a small group of physicists hastily put together a show under Jaana’s directions which was presented to the freshmen during the welcome event. According to the group of core ManMan performers at the time, the show was far from a success; ManMan had to dance in a dark, gravelly pit with only an old, raspy tape recorder to play their music on.

For some inexplicable reason, ManMan still started to get gigs, lots and lots of gigs and the original group was excited to continue ManMan with one successfully recruited freshman. Soon student circles were flooded with heated discussion on the grapevine about the passionate and innovative dance group ManMan which left their audiences speechless. The women were reluctant to just stay in the audience and in the end, some even managed to infiltrate the group and join.

Over the years however, the destructive life in the public eye and artistic differences within the group spelled the end of ManMan, as its members started to pursue solo careers. The legend, however, remained…

… and in the spring of 2012, like the noble phoenix, ManMan rose from the ashes stronger than ever!